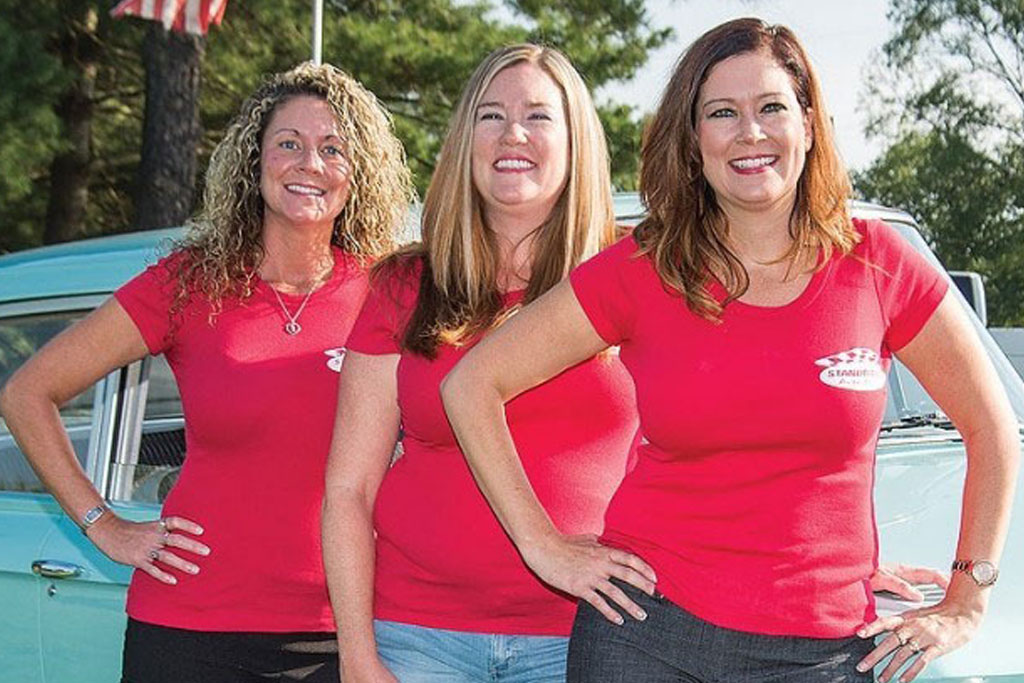 There are 15 auto recycling facilities in Cleveland County, North Carolina. But Standridge Auto Parts in Shelby, N.C. stands out as something special. In a male-dominated industry, it’s a facility run by three women. Not only are the sisters – Jody Standridge, Deedra Dimsdale and Stacey Walker – the second-generation in this business, they are continuing a legacy started by their father, Billy Standridge, a NASCAR driver and car enthusiast who died after a sudden, swift battle with cancer.

“Our father was diagnosed in March and passed away in April 2014,” said Jody. “We had just six weeks while he was sick to plan for the future, and hit the ground running. Deedra and I were already involved in the business. Stacey has a business with her husband building custom cabinets, so she had to come over to help.”

Founded in 1972, Standridge Auto Parts was the original Standridge family business. Billy went on to have others, including a scrap yard and self-service facility in Rock Hill, S.C., and another yard in Winston Salem, N.C. He left the original business to his three daughters. It’s a place filled with memories for them. After all, the girls grew up here and lived on the property; Jody and Deedra still do.

Not only did Billy have a passion for cars, he loved racing. “He would race lawn mowers for fun,” according to the Standridge website. In the late 1970’s, Billy began racing stock cars, a sport that formed the backdrop for his daughters’ childhood.

“For so many years though, mom and dad used to sneak us into the race track,” wrote Stacey in an online blog tribute to her father. “We would hide under blankets or whatever we could find in the back of the car at the time; rules were, you had to be over 16 to be allowed in the pit area. Once in the pit area we would have to hide out in the race truck all day.”

NASCAR is a natural fit for an auto recycler. “You have a lot of young guys that have a body shop and build a race car on the side,” explained Stacey. “My dad knew about parts and knew how to make a car go fast. Because he was so successful, he moved up to the next level, and the next. He raced in the NASCAR Busch Series in his Pontiac, and in the Winston Cup.” Billy became known as both a competitive driver and a solid businessman. The checkered flag, the company logo, is a nod toward that NASCAR connection.

Things have changed a bit since Billy’s passing. “We were doing some mechanic work but we’re not anymore,” stated Stacey, who explained that they couldn’t focus both on that and auto recycling. “Also, the yard in South Carolina wasn’t giving us a lot of business anymore, so we had to build our business. We joined the Chamber of Commerce to get some visibility. And Jody goes out every Wednesday, and visits body shops and mechanics throughout the area and in surrounding counties, including old customers.”

“A lot of customers that I’ll visit will assume that since he passed away, the business went, too,” admitted Jody who visited 200 customers last year. “I remind them that we’re here, and that our focus is delivering quality parts on time. Just my going out as an owner shows them that we care.”

Stacey, Jody and Deedra take the time to source quality parts. Everything is tested on a car before it’s dismantled. The business is also customer responsive; it delivers about an hour away, either same day or next day.

As for being women in a traditionally male-dominated field, Jody feels it is an advantage because they do stand out. “I consider us to be young women with a small business,” said Jody. “We’re working hard on making connections, trying to get our name out there, and to provide good customer service. That’s what is going to keep customers coming back.”

Smell of a New Car

Your Cars Airbags: I bet…

Would you drive a car…

How Many Parts Does the…

Whats the Safest Car on…

Here are some interesting links for you! Enjoy your stay :)